Guardians of the Galaxy: Distributed Christ

I was expecting Guardians of the Galaxy to be a fun and funny summer action sci-fi flick and I wasn’t disappointed. I was more surprised to find a distributed model of Christ figure in it. The five main characters, who form a team, each represent one or more aspects of the Christian savior. I will explain it in detail below but fair warning: I cannot do it without spoiler-ising the movie. 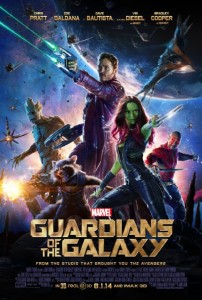 Let’s start with the hero, Peter Quill’s character, played by Chris Pratt. His mother is a virgin-like Madonna figure. On her deathbed she looks pure and as clean as one can be. Her last gesture of reaching for her son is a visual paraphrase of Michelangelo’s The Creation of Adam painting. Quill’s father is unknown (or unknowable?) and is described like an angel. So Quill is the Son of, if not God, but the next closest being. He is also the brain behind the crusade that saves the Galaxy.

Drax the Destroyer, played by Dave Bautista, is the reformed sinner. He is known as an angry, mean fighter, just look at his name. His reformation comes soon after he is thrown into a pool almost dead and then pulled out by a friend. He experiences baptism and resurrection. Then he recounts his wayward ways and renounces the anger that has driven him most of his life. He still remains a strong warrior, but what drives him from then on is (mostly) positive energy.

One of the most memorable lines of Rocket, the raccoon who became intelligent being as the result of experimentation, was ‘I didn’t ask to get made!”. It shows not just existential angst, but evokes what Jesus said on the Cross: “My God, My God, why have you forsaken me?” (Mark 15:34 and Matthew 27:46). The cynical Rocket feels that his whole existence is a joke, but then turns  around and grudgingly joins the good fight.

The name of Gamore, the only female of the team, sounds rather similar to Gomorrah. She is from the city/place of Sin, as her “foster” father, the one who killed his biological parents is the biggest evil in the universe. Next she has lived in the court of the second worst, anti-Christ character in the movie, Ronan the Accuser. However she says “I have lived most of my life surrounded by my enemies. I would be grateful to die surrounded by my friends.” She is devoted, like Jesus was to his mission and his Apostles.

I left Groot the last because he is the most interesting. He is quite literally life and light, while Jesus is the symbol of these for Christians. He is life, when a he grows a flower from his body to give to a young girl. (Eucharist anyone?) His body is also life in the green, ecological sense because he is a tree with strong roots. He is also light itself, because when he is in dark place he is capable of illuminating the space with thousands of tiny floating light sources. He is also Christ-like when sacrifices himself for humanity (or at least for his team) and then gets resurrected. The act of his sacrifice is amazing: he expands himself and provides a protective bubble for his friends. This capacity of being inclusive is an answer of the mystical debate, whether the created world and we, humans in it  are part of God or whether God exists outside us.

As you saw, each of them has one or more piece of the puzzle that makes up Christ’s attributes. It comes altogether when Quills touches the Infinity Stone. In the movie this powerful object gives unimaginable powers to the person who touches it and survives. Sounds suspiciously like the fruit from the Tree of the Knowledge of Good and Evil, straight form Genesis.  Quills can only survive holding this stone if/when his teammates join him. Unified this way, the team is finally whole, Christ has risen, so to speak, and now the evil of the world can be destroyed and happiness ensues.

Right before the potentially fatal touch Ronan screams in the most villainous voice something like “Rejoice before your paltry Gods, before I destroy you and them.” A few minutes later these “paltry Gods” save the day and the planet. Their divinity was invoked for them by their arch-enemy.