Cross and Snake in True Blood

In the sixth episode of the current season of True Blood, titled Karma, there was a powerful scene with strong iconography: on a white cross, an African-American woman with snake around her neck was practicing glossolalia, speaking in tongues in a vision to her mother from a version of the afterlife. 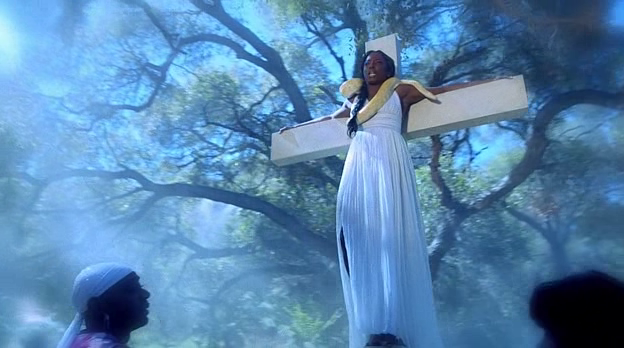 Here is a bit of a back story of how this scene came around. She was a vampire, who died the true death and literally exploded to pieces. Now she has a message to her addict mother that she delivers in this scene non-verbally from whatever version of afterlife vampires have. Her mother (and cousin) is only capable receiving the message in an altered state of consciousness, while being high on vampire blood.

In this episode we don’t learn more about the why the message (to go to her old house and find something buried in the ground there) was sent through using such strong imagery. What we do know is that her character was one of the best person in the show as a human and even as a vampire. Good candidate to become a personification of Jesus.