Paradise, The Promised Land, and Identity of/in Doctor Who 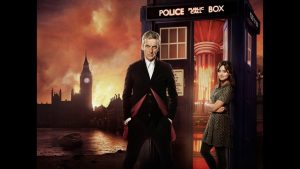 The first episode of the season 8 of the current Doctor Who TV series intertwined three topics of interests: the nature of paradise, the search for the promised land and the question of true identity.

Let’s look at them in reverse order. Towards the end of the episode The Doctor asks the alien/villain:

You are a broom. Question: You take a broom, you replace the handle. And then later you replace the brush. You do that over and over again. Is it still the same broom? Answer: No, of course it isn’t. But you can still sweep the floor, this is not strictly relevant Skip that last part. You have replaced every piece of yourself. Mechanical and organic. Time and time again. There is not a trace of original you left.

Little background information/spoiler: This villain has been on Earth for a long time cannibalizing humans and their habitat for spare parts as his body and spaceship deteriorating. Hence the reference to replacement.  We can generalize from this premise and posit the question this way: Do we have a core identity that is worth preserving even as we change through learning, forgetting and aging? Or it is just a ballast we cling to?

In answering it let’s not forget who is asking it. The Doctor, who just went through one of his periodic body changes, during which he not only loses his old body and moves into a new one, but also loses pieces of his identity and characteristics, while gaining new ones. There is a big difference between him and this alien though: The Doctor manages to keep all his memories. So one possible answer is that our memories and what we learn from them constitutes our core identity. If there is anything that makes us us it’s those.

There is a tension here though. Presumably the alien also has at least some of his memories; only his body parts have changed. Nevertheless The Doctor assists him in his suicide, uncovering his true feeling: because he lost his identity he no longer really wants to live. So do memories count in the questions of identity or body and body image can override that element?

This leads us to the meaning of (his) life: the search for the promised land. To this the Doctor says:

There isn’t any promised land. This is just a superstition. That you have picked up with all the humanity you stuffed inside yourself.

This introduces the idea that the  “promised land” is a social concept, that one can acquire through cultural (or cannibalistic) means. We don’t really know the original mission of this alien stuck on Earth, but we can agree with the Doctor that it probably was not searching for the promised land. Does the same apply to us, humans, also stuck on Earth? So what if it is indeed a concept invented by humans as a response to challenges of a certain era and place? Can it still hold true and give meaning to our life?

The first part of answer is that if we abstract to a high enough level it can be. If we think of “the promised land” as an ideal state of being, or just an ideal–as opposed to an actual physical place– it can serve as a force that drives our lives. The other part of the answer comes from The Doctor again. His reaction to the alien’s answer that the view of London from high above is beautiful:

No, it isn’t. It is just far away and too small. Up close down there everything is huge. Everything is so important. Every detail. Every moment. Every life.

In other words the journey counts as much as the outcome. You have to enjoy and consider the means to reach the promised land, whatever the latter is for you.

The last scene came as a total surprise for me. After the villain clearly died we see him in the garden of a proper 19th century British mansion. It is revealed by a proper lady in this garden that he has arrived to Paradise. If the promised land turned out to be a social construct, then this image just reinforces the idea that Paradise is one too. We all create our mental/religious image of Paradise. For a gentleman who lived most of his life (that he remembers of) as part of the Victorian society’s noble class Paradise must look like a luxurious version of the very same. How does your Paradise look like today, from 21st century?