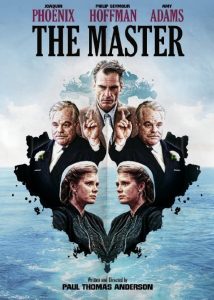 Excerpts from Allie Tollaksen‘s review at the The Observer, a student-run, newspaper serving Notre Dame and Saint Mary’s:

… many assumed the film was a thinly-veiled history of a religion or a condemnation of its practices. But while “The Master” centers on a vulnerable World War II veteran (Joaquin Phoenix) who meets Dodd, the leader of a nascent religious movement called The Cause, the Hubbard-inspired Cause is only one small part of a larger story about depression and isolation in postwar America….

The science-fiction-like Cause and Quell’s involvement with the religious group seems considerably less outlandish.
Rather than criticize or even attempt to completely understand the inner workings of Scientology, the inspiration for The Cause, Anderson uses the religious movement as a symptom of its time.

Buy The Master on DVD/BluRay or watch instantly

The film at IMDB