Spiritual stepcounter, aka thoughts on “The Two Popes” (USA, 2019) 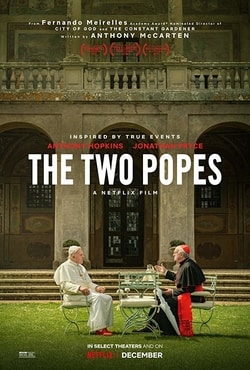 One of the key themes of The Two Popes is change vs compromise. An interesting, technical, symbol of this debate is the stepcounter, that keeps telling Pope Benedict XVI to keep going. The digital machine not just informs  Benedict that he either didn’t move enough, i.e. didn’t perform the ideal number of steps that day to stay healthy for his age, but also rewards him positive feedback when he accomplished the set goal. The filmmakers/screenwriters used the little recurring audio clue to emphasize the change that occurs in Pope Benedict XVI and what Pope Francis stands for.

Here is a segment from the first, in person conversation of the two popes
Benedict: You were not unlike me.
Francis: No. I changed.
Benedict:  No, you compromised.
Francis: No. No compromise.  No, I changed. […] It’s a different thing.
Benedict:   Change is compromise.
It is clear that Benedict is depicted as a conservative, who believes that changes is bad as it involves compromise, which is not what the faithful should do. On he other hand Francis, who is more progressive in many regards, sees change as not just inevitable, but necessary part of service. The ultimate theological question in this topic is whether God is capable of changing. A minute after the exchange above the two popes clash their opposite views, Francis supporting his view of a changing God that “He moves towards us.”
The filmmakers depict Francis in a more sympathetic light than they do Benedict. E.g. we learn more about his back story, than that of Benedict’s, who doesn’t even get a single flashback scene, unlike his successor. However, by the end of the movie and his career Benedict embraces the idea that change does not necessary mean compromise. He even invokes a change that didn’t happen for 700 years in papacy, he resigns. Change is capable embracing conserving some of the past, while it is less true the other way around.
Benedict obeys the command of the physical stepcounter every single time and moves on when it dictates him to do so. He also learned to accept the command of the spiritual stepcounter and recognized when it was time to move on spiritually and make space for a new Pope taking the Church to a new direction. We all could use a spiritual stepcounter to advise us, when it is time to open our mind and hearts and embrace new directions to move towards to.
There is a debate how accurately this film shows the theological differences and progression of the two popes. We know that the meetings shown here were fictional, but that doesn’t mean necessarily mean that the main characters’ ideas were portrayed erroneously. This very debate tells more about the filmmakers orientation: they are clearly in the progressive camp.
—
Useful links

Behind Vatican walls, the conservative Pope Benedict XVI and the liberal future Pope Francis must find common ground to forge a new path for the Catholic Church.