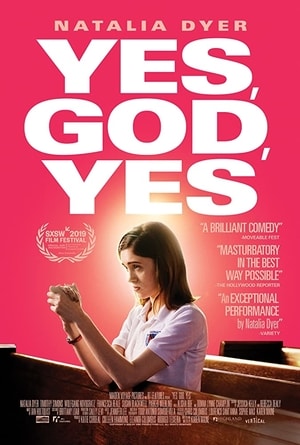 You don’t argue with people’s feelings and experiences, right? But you can always disagree with their opinions and attempt to widen their horizons and understandings. I read (and recommend reading) two interviews with Karen Maine, the writer and director of Yes, God, Yes at Screen Queens and Jezebel. Based on this I understand that the movie was based on her experiences, so I won’t argue with her emotions. However as a simple viewer I find its characters too one dimensional. If it had been a documentary I could accuse the movie of showing only one side of a phenomena. But being a feature movie I cannot make it accountable for showing only the negative side of a religious community.

Watching this neat little film that depicts the hypocrisy of religious people painfully well, made me feel uncomfortable. I had some personal exposure to the kind of community the movie is set in, although I have never been the member of such. I have no doubt that the “preaching water and drinking wine” kind of hypocrisy relating to sexual mores exists there. However I have no idea of the proportions, what percentage of Christian people are like that and how many of them live in harmony and according to their deeply held convictions. I strongly suspect that the film is slanted in this regards and most Christians are not hypocrites. I know that this is satire and was not intended to show an accurate picture of religion and sex but it still made me feel sad for the group depicted.

I understand of some Christians were outraged by it. Even my, a non-Christian’s, religious sensibility was offended. I wish it had shown more sympathy for the religion and not just emphasized its restrictive nature. On the other hand I also think that it can be an important film for teenagers who are in similar situation as the protagonist was. It can be a powerfully liberating experience to learn that life exists beyond dogma. Once you no longer believe that you will go to hell for minor transgressions who knows where you will end up. You need to be careful though as liberation may lead to sexual and other kind of liberations.

I liked the metaphor of online life used on this film for the transformation. The trouble for our young heroine started in an AOL chatroom. For those of you who are too young and/or not American: AOL, America Online was a huge online service before the dawn of World Wide Web. Being possibly the largest of “walled gardens” in the 1990’s meant that its users could access content only what editors posted. When the web came around its power rose from the fact that anybody could post anything and anybody with a net connection could access it. At the end of the movie the main character of the movie searches for answers on the open web (via the newcomer Yahoo), where answers do not come from only prescribed sources. This opening up for her on the internet was a not so subtle sign of how she expanded from the closed community (of idea and people) of her church to the whole wide world, with its boundless possibilities and viewpoints.

If you don’t mind a bit of black and white characters you will enjoy this coming of age/liberation movie, where all the “sexually explicit” moments happen fully clothed.

Buy it on DVD or watch it on Amazon Prime