Hannah McGill at The Scotsman wrote about religious films on the account of “God Help the Girl“: 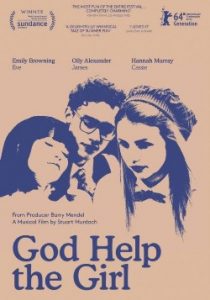 Is this a Christian film? And what if it is? “The Bible’s my tool,” trills our ravishing protagonist, named Eve, in the course of the film’s first song. Later on, she and a friend talk positively about going to church. But this element of the story is kept rather coyly in the background; and viewers of the film to date, even in an America somewhat obsessed with religious identities and divides (it premiered at the Sundance Film Festival, in staunchly Mormon Utah), haven’t paid it much mind.
…
Against the overwhelmingly secular, cynical, lefty-liberal backdrop of American indie’s favourite festival, the effect [of showing a devout movie] was near-exotic (though it didn’t make the film any better). Sundance hasn’t exactly had a conversion since, but subsequent American faith films have built a certain box office profile for their kind. 2010’s Letters to God was rewarded for having “prayer warriors” on-set by entering the US Top Ten.

More recently, the unsubtly-titled lies of God’s Not Dead And Heaven Is For Real (which strayed from the usual path of the faith film by featuring a name actor, Greg Kinnear) have won studio backing and done respectable business.