Fundraiser: Ignacio: A Film About The First Jesuit 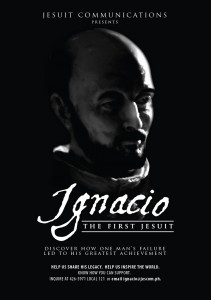 There is a campaign on Indiegogo to raise funds to make a movie about the Ignacio:

[It] is a full-length feature film about St. Ignatius of Loyola, founder of the Society of Jesus.  It is an incisive and thrilling look at his life as told by a young priest who was once assigned to defend him before the Spanish Inquisition. We meet the real man behind the legend, following his transformation from a brash, impulsive youth obsessed with women and sword-fighting; to the masterful, charismatic leader of an order that would change the face of Christendom.”

In his lifelong quest to become the heroic Knight of his fantasies, Ignacio stares death in the face again and again, finding himself imprisoned for murder; having his leg shattered by a cannonball in battle; driven to near suicide by his inner demons; and finally finding his life in the hands of the Inquisition. Through it all, he would come to see the hand of God working in his life, shaping the self-obsessed sinner into the loyal and passionate soldier-saint.

IGNACIO: A Film about the First Jesuit from Jesuit Communications on Vimeo.

I learned about the movie from this blog post at Archive Weekly, where the author read up on Ignatius and came away with this conclusion:

St. Ignatius’ story inspired me, but he did not do so a devout. He inspired me as a human being. I believe only a chosen few would match the legacy that St. Ignatius left into the world. Still, he is a reminder that people can change for the better.