The wrote about an episode of the TV series Rectify titled Mazel Tov:

Rectify marks the first time I have seen a TV show reference Thomas Aquinas. In a moment of reconciliation between Tawny and Teddy, Teddy picks up the book on Tawny’s nightstand and reads:
“Love may be of the seen and of the unseen, of the present and of the absent. Consequently a thing to be loved is not so adapted to faith, as a thing to be hoped for, since hope is always of the absent and the unseen. “
This comes from the Second Part of the Second Part of Thomas Aquinas Summa Theologica, which deals with the nature of faith. 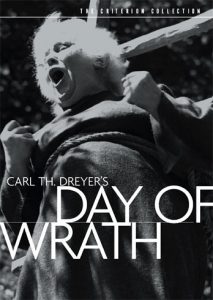 They covered a 1943 Danish movie, Day of Wrath, set in the 17th century. Their conclusion:

There is above all a relentless honesty to the director’s gaze: he challenges us to look on the terrifying mix of pitiable humanity and self-serving evil that coexist in the human heart, and to our shame we flinch and look away, seeing only what it serves us to see – thereby implicating ourselves in the very evils we see (or don’t see) on the screen in front of us.

[The] binary scheme of “magical” or “nuts” is essentially the drama of The Strange Little Cat, one of the best films I have seen in the past few years. Though the film at times hints at much darker subtexts than are present in its exchanges – its kindness, its clarity, and its crafted denial of an ironic pose is refreshing.

Finally, M Leary, the author of the blog, commented on Grigris:

It is a good reminder of how cinema watches people sharing the material weight of their anxieties with us, Démé physically narrating the hoped-for release from the cruelties he has encountered. It is incredible to watch him momentarily reject the idea that his withered leg is a liability, totally at ease with himself – though we then track with him, and his painful looking limp, through the rest of the film.
Trailer