Bigger than Ben-Hur: The Book, Its Adaptations, and Their Audiences 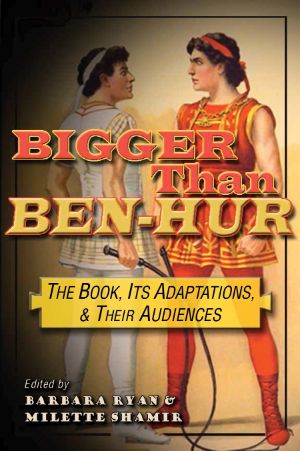 First published in 1880, Ben-Hur: A Tale of the Christ became a best-seller. The popular novel spawned an 1899 stage adaptation, reaching audiences of over 10 million, and two highly successful film adaptations. For over a century, it has become a ubiquitous pop cultural presence, representing a deeply powerful story and monumental experience for some and a defining work of bad taste and false piety for others. The first and only collection of essays on this pivotal cultural icon, Bigger Than "Ben-Hur" addresses Lew Wallace's beloved classic to explore its polarizing effect and to expand the contexts within which it can be studied. In the essays gathered here, scholars approach Ben-Hur from multiple directions- religious and secular, literary, theatrical, and cinematic-to understand not just one story in varied formats but also what they term the "Ben-Hur tradition." Drawing from a wide range of disciplines, contributions include the rise of the Protestant novel in the United States; relationships between and among religion, spectacle, and consumerism; the "New Woman" in early Hollywood; and a "wish list" for future adaptations, among others. Together, these essays explore how this remarkably fluid story of faith, love, and revenge has remained relevant to audiences across the globe for over 130 years.