The Theology of ‘Jurassic Park’ 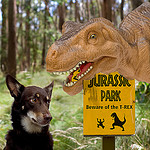 Viewing Spielberg’s 1993 sci-fi classic through the Lubavitcher Rebbe’s lens…
The characters in Jurassic Park probably wouldn’t find much common ground with the Rebbe’s science, but the film and Chabad nonetheless share a number of preoccupations: messianic figures, the revival of the dead, and the creation of heaven on earth….