Baring Our Souls: TV Talk Shows and the Religion of Recovery 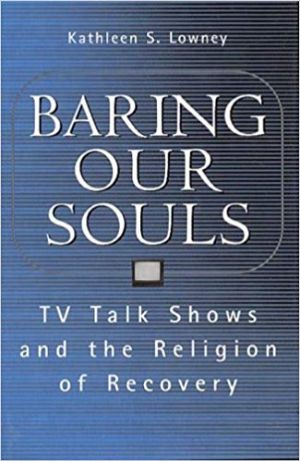 Television talk shows are a recent phenomenon, but their roots go back to the itinerant circuses and religious revivals of the nineteenth century. Circuses made their money by displaying "freaks," just as talk shows emphasize only the deviant aspects of their guests' lives. And like the revivalists of old, talk show hosts such as Oprah Winfrey and Montel Williams attempt to convert their guests through healing powers. Guests who have been victimized give witness to the pain and suffering they have endured at the hands of their victimizers. The liturgy of these salvational talk shows builds to a moment of conversion, when victimizers see the error of their ways. The hosts, victims, relationship experts and audience each play their part in the conversion drama that unfolds daily over the airways. After framing the genre in this way, Dr. Lowney's book raises the essential question, conversion to what? The faith preached on talk shows is based on the principles of the Recovery Movement, among whose tenets are that care for one's self is the highest virtue and the psychological wounds that endure from childhood into adulthood create troublesome and addictive behaviors or "codependency." The only "cure" is to join a therapeutic 12-step group. Such groups, however, often consist of individuals talking at rather than to one another, like the guests on the talk shows. Beneath a fictive sense of community, each member is out to maintain his or her equilibrium by whatever means possible. Baring Our Souls probes the roots of the genre in the religion of recovery, and holds both up to the scrutiny of sociological inquiry. Through careful analysis of transcripts and ideological presuppositions, Lowney examines the consequences for public discourse about social problems when the media usurp the dialogue by psychologizing the social. She argues forcefully that Americans need to be able to discuss poverty or discrimination rather than simply blame the victims of such adversities. In espousing the religion of recovery, talk shows make such public discourse difficult indeed. This will be a welcome supplementary text in courses in social problems, media and civil religion. Kathleen S. Lowney is professor of sociology, anthropology and criminal justice at Valdosta State University, Georgia. Dr. Lowney has published on kudzu, Satanism, the Unification Church, families and social theory.