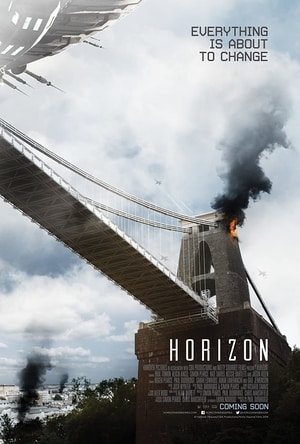 The writers of Horizon were not afraid to demonstrate their ambivalent feelings towards the church. One one hand, the first representation of religion in the film, is a priest, who is capable to provide only this answer to the question about the meaning of faith in God after aliens arrive to Earth.

It’s impossible to see what the Lord has planned for us  but we must keep our faith now in our hour of need. He’s giving us a chance to return to him, even those who have strayed in the past.

This can be interpreted as negative: the clergyman couldn’t come up with new answers for new types of challenges so he just regurgitated the reassuring dogma. Or positive: even facing previously unimaginable circumstances he stayed strong in his faith and managed to support others too. The latter fits well with Emile Durkheim’s functionalist approach to religions, where he argued that it provides social cohesion and social control to maintain society in social solidarity.

On the other hand I found more interesting than the textbook question and answer is how  the building of the church is used as a double sanctuary. First, it was a gathering place for the still faithful who were afraid of the outside and possibly the inner chaos. As the priest himself admitted though it was a small group. Second, a room in it served as a local history museum, which provided a key to resolving the conflict with the invaders. By preserving this object for 150 years it not just ensured its safety, but also the future of humanity. So while the immediate social impact of the church was relatively small-scale it still had a significant role in the bigger picture. This double, skeptical yet positive, perspective is I believe is quite prevalent in today’s secular society.

I’d rather not write much about the movie itself as I don’t like to write negatives. I watched it because I watch almost every sci-fi I can. The technical aspects (camerawork,  sound, setting and lighting) were solid, well-executed. And there were some high points in the acting and the story itself. Most of these occurred in the one scene set  in the 19th century. Overall it was an uneven production though.

Bristol, United Kingdom. The lives of five people are forever changed when a mysterious alien ship appears on the skyline over their home-town. Its intentions unclear, the disparate group attempt to find safety and reach loved ones, but their efforts are impeded by a city in panic, looters, and the threat of military attack. As they battle to stick together, loyalties and relationships are tested, and an even larger question remains: who are these mysterious visitors and why are they here?