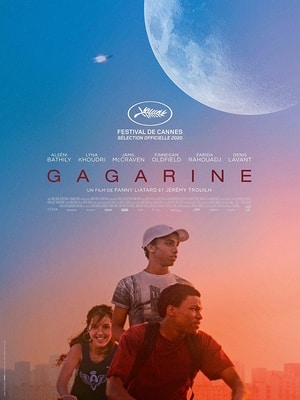 S.O.S. got a new meaning via Youri and Gagarin who lived in a symbiotic relationship. Let me break down this sentence: Cité Gagarine was a real building, a 370-apartment housing project in outer Paris that was demolished in August 2019. It was named after the Soviet astronaut who visited Pairs in 1963, the year when the building was finished. Youri, the protagonist of the 2020 French films was named after the same person. He is a black teenager who tries to save the building by making it compliant with modern building standards. Despite his best, creative, naive, and heroic efforts he fails to do so this building is marked for flattening. The film follows the tenants, members of a strong multi-ethnic and multi-cultural community leaving.

As Youri is getting abandoned by his family and friends he opts not to abandon the only place on Earth that he knows and is connected to. His life force is the building and first, he envisions that he is the building’s. As the movie progresses he lifts his visions higher and builds a DYI spaceship on the upper floors of the building. You may think that his goal becomes out of this world; applying the “magical realism” label would be also appropriate. However, there is also a view that he rises above the minutiae of life and becomes a savior figure. Without trying to spoil the end of the movie let me just say that he brings light.

The film’s visuals and themes are packed with religious symbols. Beyond the aforementioned transformation into light that surprises and inspires awe in everybody who witnesses it, we are also treated to a lush reframing of the crucifix and the pieta images. Instead of nailed to a cross by others, our hero chooses to experience weightlessness during which he appears in the classic pose. This single image, along with the path leading to it combines the themes of self-sacrifice for the community and viewing escaping as an opportunity. After the symbolic crucifixion scene but we also see a carefully composed picture where he is held by a woman–really just a girl, who loved her–like the Virgin Mary cradling the dead body of Jesus in many pietà representations.

In this review, I focused on the religious aspect of the film, but there is plenty to explore if you look via the social lens (immigration, family, racism, poverty) or the psychological (hope, dreams, isolation, perseverance, letting things go). No matter how you look at it this film is not just a rich, soulful, visually stunning film, but an encounter that will stay long with you if you are open to it.

FYI: I watched this film as part of the French-speaking film festival, “Frankofón Filmnapok” in Hungary.

Yuri fights to save his home town - which he shares with his namesake, Yuri Gagarin - from demolition.