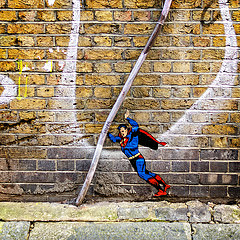 When a raging Sun makes death and destruction imminent for his people, an infant child is hidden inside a vessel and sent far away, where he’s found and raised by kind adoptive parents. The child grows and, compelled to take actions in the name of justice, sets out into the world and discovers he has a heroic destiny to save people using amazing powers granted to him after his contact with bright flames representing life and power.

So, am I describing Superman, or Moses? The answer, of course, is both.

The Pharaoh represents the sun god Ra, and Pharaoh ordered the death of all Hebrew male babies, so Moses’ mother to put him in a small craft in the Nile River to survive”

A key section of the second part is:

Hollywood will likely continue producing new Biblical and faith-based movies, now that they’ve found the best approach for adapting those tales for modern audiences. And it’s all because superhero movies became the biggest genre in cinema, providing modern myths that resonated with audiences who had little or no other true mythology being offered to them in film on a consistent basis, and thus setting the stage for Hollywood’s revival of other popular mythic genres. As audiences embraced mythology in film again via the popular superhero movies, it awakened a renewed interest in films offering mythological storytelling based on the Bible.

Then it goes onto an interview with Roma Downey

Read the first article and then the second!