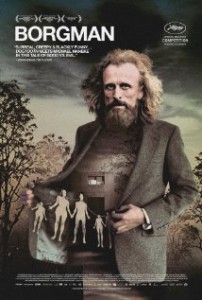 Borgman, written and directed by Dutch filmmaker Alex van Warmerdam, is one of those weird, disturbing films that’s more mentally than physically unsettling….When the film ends, we’re no less certain of just who Borgman and his cronies are either. Are they representative of spurned innocence, unjustly cast out of a modern-day Garden of Eden? Are they Evil incarnate that, quite literally, spawns from the Earth? Are they appointed, as the opening quotation seems to suggest, to right society’s wrongs? The three hunters at the beginning of the film might stand in for the established religious, industrial, and agricultural order, which could explained why they feel so threatened. Recalling the Judeo-Christian notions of entertaining angels and serving the least of these, Borgman and the others could be seen as angelic beings who react in revenge after having been treated so inhospitably?