Best Seat In The House Of Worship: The Temple Hollywood Built 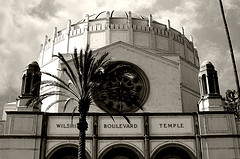 There’s an 85-year-old building on Wilshire Boulevard in Los Angeles… Modeled after Rome’s Pantheon, the  was built by movie moguls — Louis B. Mayer of MGM; Irving Thalberg, MGM’s production head; Carl Laemmle, founder of Universal; and the Warner brothers. They all deployed craftsmen from their studios to adorn the temple.