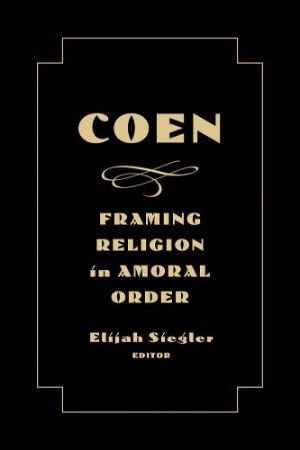 Raising Arizona, Fargo, The Big Lebowski, No Country for Old Men, True Grit—Joel and Ethan Coen make movies. They make movies that matter. But do these movies matter for religion? Coen is a masterful response to this question of religious significance that neither imposes alien orthodoxy nor consigns the Coens to religious insignificance. The Coen movies discussed each receive a chapter-length investigation of the specific film’s relation to the religious. Far more than just documenting religion in all Coen films—from blink-and you’ll-miss-them biblical references to gospel tunes framing the soundtrack—the volume, cumulatively, mounts a compelling case for the Coens’ consistent religious outlook with an original argument about precisely what constitutes religion. The volume reveals how Coen films emerge as morality tales, set in a mythological American landscape, that critique greed and self-interest. Coen heroes often confront apocalyptic and unredeemable evil, face human limitation and the banality of violence, and force audiences to wrestle with redemption and grace within the stark moral worlds portrayed on screen. This is religion on Coen terms. Coen teaches its readers something new about religion, about film, and about the kind of world-making that each claims to be.