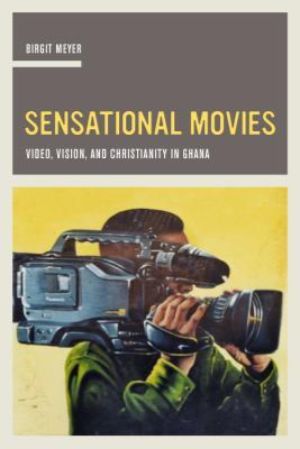 Tracing the rise and development of the Ghanaian video film industry between 1985 and 2010, Sensational Movies examines video movies as seismographic devices recording a culture and society in turmoil. This book captures the dynamic process of popular filmmaking in Ghana as a new medium for the imagination and tracks the interlacing of the medium’s technological, economic, social, cultural, and religious aspects. Stepping into the void left by the defunct state film industry, video movies negotiate the imaginaries deployed by state cinema on the one hand and Christianity on the other.
Birgit Meyer analyzes Ghanaian video as a powerful, sensational form. Colliding with the state film industry’s representations of culture, these movies are indebted to religious notions of divination and revelation. Exploring the format of “film as revelation,” Meyer unpacks the affinity between cinematic and popular Christian modes of looking and showcases the transgressive potential haunting figurations of the occult. In this brilliant study, Meyer offers a deep, conceptually innovative analysis of the role of visual culture within the politics and aesthetics of religious world making.