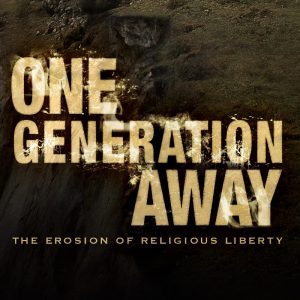 America’s religious freedom is a “remarkable privilege,” policy analyst Jennifer Marshall states in the film [One Generation Away: The Erosion of Religious Liberty] prescreened on July 28 at Marshall’s own Heritage Foundation. Yet as the film’s namesake quotation by Ronald Reagan warns in the credits, “freedom is never more than one generation away from extinction,” something not passed “on to our children in the bloodstream.” Marriage analyst Eric Teetsel explains that a believer’s “entire life is to be an act of worship.” Secularists increasingly seek to limit devotion to a few hours weekly in a house of worship. “We have the right to carry what was in our heads into the affairs of our daily life,” Alliance Defending Freedom President Alan Sears concurs.

One Generation Away: The Erosion of Religious Liberty – official site