Hermeneutic Humility and the Political Theology of Cinema: Blind Paul 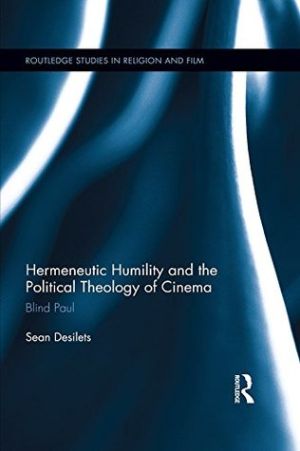 This book revisits the tradition of Western religious cinema in light of scholarship on St. Paul’s political theology. The book’s subtitle derives from the account in the Book of Acts that St. Paul was temporarily blinded in the wake of his conversion on the road to Damascus. In imitation of Paul, the films on which Sean Desilets’s analysis hinges (including those of Carl-Th. Dreyer, Robert Bresson, Pier Paolo Pasolini, and Carlos Reygadas) place a god-blind mechanism, the camera, between themselves and the divine. Desilets calls the posture they adopt "hermeneutic humility": hermeneutic in that it interprets the world, but humble in that it pays particular―even obsessive―attention to its own limits. Though these films may not consciously reflect Pauline theology, Desilets argues that they participate in a messianic-hermeneutic tradition that runs from Paul through St. Augustine, Blaise Pascal, Karl Barth, and Walter Benjamin, and which contributes significantly to contemporary discussions in poststructuralist literary theory, political theology, and religious studies. Desilets’s insightful explication of Jean-Luc Nancy’s deconstruction of Christianity and Georgio Agamben’s recent work on religion makes a substantial contribution to film philosophy and emerging critical trends in the study of religion and film. This book puts forward a nuanced theoretical framework that will be useful for film scholars, students of contemporary political theology, and scholars interested in the intersections of religion and media.