America’s Most Famous Catholic (According to Himself): Stephen Colbert 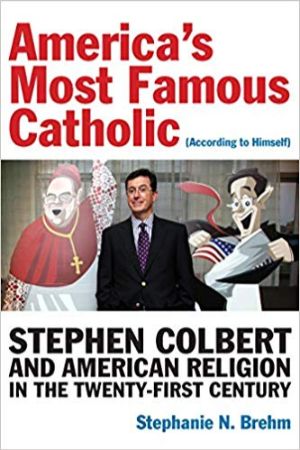 For nine years, Stephen Colbert’s persona, “Colbert”―a Republican superhero and parody of conservative political pundits―informed audiences on current events, politics, social issues, and religion while lampooning conservative political policy, biblical literalism, and religious hypocrisy. As devout, vocal, and authoritative lay Catholics, religion is central to both the actor and his most famous character. Yet many viewers wonder, “Is Colbert a practicing Catholic in real life or is this part of his act?” America’s Most Famous Catholic (According to Himself) examines the ways in which Colbert challenges perceptions of Catholicism and Catholic mores through his faith and comedy.
Religion and the foibles of religious institutions have served as rich fodder for scores of comedians over the years. What set “Colbert” apart on his Comedy Central show, The Colbert Report, was that his critical observations were made more powerful and harder to ignore because he approached religious material not from the predictable stance of the irreverent secular comedian but from his position as one of the faithful. He is a Catholic celebrity who can bridge critical outsider and participating insider, neither fully reverent nor fully irreverent.
Providing a digital media ethnography and rhetorical analysis of Stephen Colbert and his character from 2005 to 2014, author Stephanie N. Brehm examines the intersection between lived religion and mass media, moving from an exploration of how Catholicism shapes Colbert’s life and world toward a conversation about how “Colbert” shapes Catholicism. Brehm provides historical context by discovering how “Colbert” compares to other Catholic figures, such Don Novello, George Carlin, Louis C.K., and Jim Gaffigan, who have each presented their views of Catholicism to Americans through radio, film, and television. The last chapter provides a current glimpse of Colbert on The Late Show, where he continues to be a voice for Catholicism on late night, now to an even broader audience.
America’s Most Famous Catholic (According to Himself) also explores how Colbert carved space for Americans who currently define their religious lives through absence, ambivalence, and alternatives. Brehm reflects on the complexity of contemporary American Catholicism as it is lived today in the often-ignored form of Catholic multiplicity: thinking Catholics, cultural Catholics, cafeteria Catholics, and lukewarm Catholics, or what others have called Colbert C