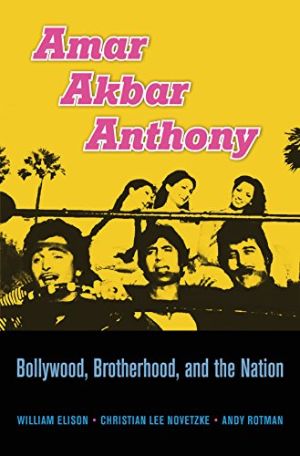 A Bollywood blockbuster when it was released in 1977, Amar Akbar Anthony has become a classic of Hindi cinema and a touchstone of Indian popular culture. Delighting audiences with its songs and madcap adventures, the film follows the heroics of three Bombay brothers separated in childhood from their parents and one another. Beyond the freewheeling comedy and camp, however, is a potent vision of social harmony, as the three protagonists, each raised in a different religion, discover they are true brothers in the end. William Elison, Christian Lee Novetzke, and Andy Rotman offer a sympathetic and layered interpretation of the film’s deeper symbolism, seeing it as a lens for understanding modern India’s experience with secular democracy.
Amar Akbar Anthony’s celebration of an India built on pluralism and religious tolerance continues to resonate with audiences today. But it also invites a critique of modernity’s mixed blessings. As the authors show, the film’s sunny exterior only partially conceals darker elements: the shadow of Partition, the crisis of Emergency Rule, and the vexed implications of the metaphor of the family for the nation. The lessons viewers draw from the film depend largely on which brother they recognize as its hero. Is it Amar, the straight-edge Hindu policeman? Is it Akbar, the romantic Muslim singer? Or is it Anthony, the Christian outlaw with a heart of gold? In this book’s innovative and multi-perspectival approach, each brother makes his case for himself (although the last word belongs to their mother).