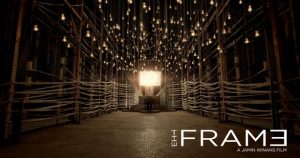 Since then, I haven’t heard or seen much from Winans, aside from a clever short film. As such, I was very pleasantly surprised to learn that he has completed a new feature, another fantastical-looking film titled The Frame.
The film’s trailer is a kaleidoscope of intriguing imagery, including a shot of a large alien-looking structure looming over a city and a scene where somebody dissolves into something like black liquid. What it all means, though, isn’t too clear, and Winans is keeping any plot details under wraps for now.