I Just Saw Jesus: The JESUS Film – From Vision, to Reality, to the Unimaginable 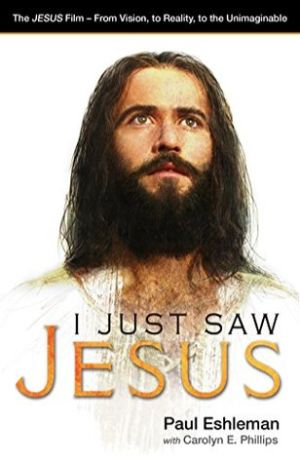 This miraculous story reveals how JESUS began as one man’s vision and became a record-breaking film shown more than 9 billion times and convincing millions to follow Christ. Volunteer film teams, missionaries, and pastors risk their lives daily, showing the film in remote tribes and villages, among religions that strictly prohibit Christianity, and even to the world’s most elite and powerful leaders. They have overcome threats, witches’ curses, and deadly diseases. The teams carry compact generators and portable projectors, often traveling by foot or horseback, bush plane or canoe. Their pure, unbridled joy comes from sharing JESUS with those who have not yet seen and heard the gospel. Brian Deacon, the actor who portrays Jesus, speaks only words taken directly from the Gospel of Luke. As biblically accurate as possible, the JESUS film is taking Jesus to the world’s men, women, and children in their own heart language. Translated into more than 1,400 languages, with more planned, this film is changing the world. JESUS is being seen and heard, and His words are proving as powerful today as they were 2,000 years ago.