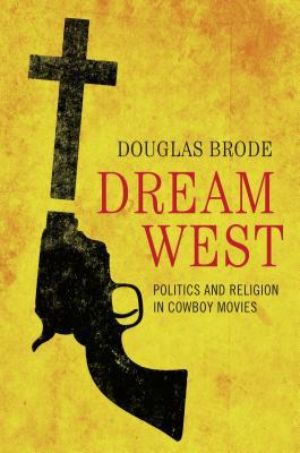 While political liberals celebrated the end of “cowboy politics” with the election of Barack Obama to the presidency, political conservatives in the Tea Party and other like-minded groups still vociferously support “cowboy” values such as small government, low taxes, free-market capitalism, and the right to bear arms. Yet, as Douglas Brode argues in this paradigm-shifting book, these supposedly cowboy or “Old West” values hail not so much from the actual American frontier of the nineteenth century as from Hollywood’s portrayal of it in the twentieth century. And a close reading of Western films and TV shows reveals a much more complex picture than the romanticized, simplistic vision espoused by the conservative right.
Examining dozens of Westerns, including Gunfight at the O.K. Corral, Red River, 3:10 to Yuma (old and new), The Wild Ones, High Noon, My Darling Clementine, The Alamo, and No Country for Old Men, Brode demonstrates that the genre (with notable exceptions that he fully covers) was the product of Hollywood liberals who used it to project a progressive agenda on issues such as gun control, environmental protection, respect for non-Christian belief systems, and community cohesion versus rugged individualism. Challenging us to rethink everything we thought we knew about the genre, Brode argues that the Western stands for precisely the opposite of what most people today—whether they love it or hate it—believe to be the essential premise of “the only truly, authentically, and uniquely American narrative form.”