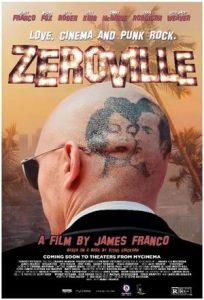 From the New York Times

Whatever the merits of its source material (Steve Erickson’s well-received 2007 novel), this Franco-filled project — aside from directing, he’s in virtually every scene, for the most part near-catatonic — is painful to sit through. Playing an ex-seminarian known as Vikar, Franco is so obsessed with film in general and George Stevens’s 1951 classic, “A Place in the Sun,” in particular that he has its stars tattooed on his shaven skull.

Zeroville: @IMDB, the book, the trailer: