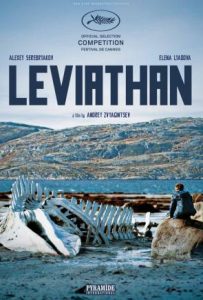 In its original religious context, Leviathan is a sea monster mentioned by God in the Book of Job to demonstrate (for the umpteenth time) his power over even the most fearsome parts of nature. By now, though, we’re familiar with Leviathan as a secular symbol, whether representing the magnitude of nature that, with no powerful god to subjugate it, still threatens to overwhelm humanity, or, following Thomas Hobbes, a mighty head of state that brings order to anarchic human society. Andrey Zvyagintsev’s film Leviathan starts as a story about political corruption in a Northern Russian town before eventually extending into a full-blown reimagining of the Book of Job, which might make you think that it’s harkening back to the original notion of its eponymous monster. Zvyagintsev’s intents, however, are more difficult to ascertain. As the film’s scope expands, the meaning of Leviathan in the film becomes a moving target, the ultimate joke being on those who think any single interpretation is the final and correct one.