These films are examples of passion plays, or are inspired by the current of traditional religious stories that pass through the center of any given culture. 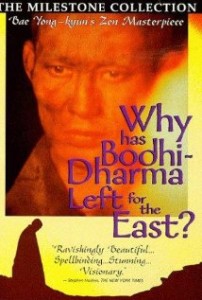 Why Has The Bodhidharma Left For The East

The Korean film Why Has The Bodhidharma Left for the East created by Bae Yong-kyun, may be difficult to get your hands on, but can serve as an insightful and appropriately cryptic look at the fundamental concerns of Zen Buddhism.

There is a classic Japanese post-war film The Burmese Harp directed by Kon Ichikawa in 1956, which deals with a more generalized spirit of Buddhism, and is a film that may introduce you to Japanese Buddhism in the modern age.

Sikh, Muslim and Hindu relations are explored in the 2012 film, Partition, directed by Vic Sarin. The story is set in the 1947 partition of the Punjab.

Read full, annotated list/post by Religion and the Honest Student