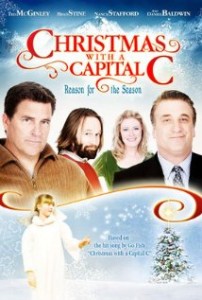 Adam Graham at Caffeinated Thoughts compiled a list of “good examples of Christians making enjoyable and worthwhile films.” In the first of two posts he included Cross and the Switchblade (1970), Deadly Choice (1982), The Wait of the World (1985) and the Omega Code (1999). The second post had more recent movies: Late One Night (2001), Sherwood Pictures’ four films (Flywheel, Facing the Giants, Fireproof, and Courageous), The Second Chance (2006) and Christmas with a Capital C (2011).

In this film, irreligious businessman Mitch Bright (Adam Baldwin) returns to his small Alaska town and discovers his high school rival Dan Reed (Ted McGinley) is now the mayor. Mitch tries to drive a wedge between the mayor and his fellow citizens by suggesting the mayor’s religious Christmas displays are a barrier to business growth.