Buddhism Goes to the Movies: Introduction to Buddhist Thought and Practice 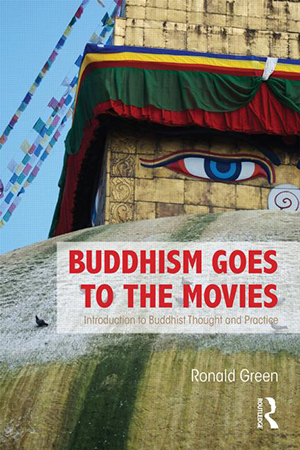 Buddhism Goes to the Movies: Introduction to Buddhist Thought and Practice explains the basics of Buddhist philosophy and practice through a number of dramatic films from around the world. This book introduces readers in a dynamic way to the major traditions of Buddhism: the Theravada, and various interrelated Mahayana divisions including Zen, Pure Land and Tantric Buddhism. Students can use Ronald Green’s book to gain insights into classic Buddhist themes, including Buddhist awakening, the importance of the theory of dependent origination, the notion of no-self, and Buddhist ideas about life, death and why we are here. Contemporary developments are also explored, including the Socially Engaged Buddhism demonstrated by such figures as the Dalai Lama, Thich Nhat Hanh, Aung San Suu Kyi, and other Buddhist activists. Finally, comparisons between filmic expressions of Buddhism and more traditional artistic expressions of Buddhism—such as mandala drawings—are also drawn.
An important addition to any introduction to Buddhist philosophy and practice, Buddhism Goes to the Movies is an excellent way to bring Buddhist thought, history, and activity to the uninitiated and interested reader.