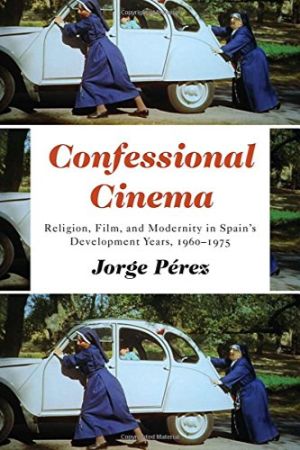 In Confessional Cinema, Jorge Pérez analyzes how cinema engaged the shifting role of religion during the last fifteen years of Francisco Franco’s dictatorship. Pérez interrogates the assumption that after 1957, when the Franco regime recast itself in a secular and modernizing fashion, religion vanished from the cultural field. Instead, Spanish cinema addressed the transformation within Spanish Catholicism following Vatican II and Spain’s modernization processes.
Confessional Cinema offers the first analysis of a neglected body of Spanish films, "nun films," which focus on the active role of religious women in the transformation of Spanish Catholicism. Pérez argues that commercial films, despite being less aesthetically accomplished, delved more than oppositional, art-house films into the fluctuating zeitgeist of the development years regarding the transformations within Spanish Catholicism. Confessional Cinema offers a provocative and original analysis of the significance of religion not from a theological point of view, but rather as a socio-political force and cultural determinant in the Spanish public sphere of this period, known as desarrollismo (development years) from 1960-1975.