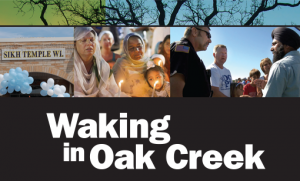 Waking in Oak Creek, a new documentary film about a community working together to overcome tragedy after six worshippers at the Sikh Temple of Wisconsin were killed by a white supremacist, has been officially released by the U.S. Department of Justice Office of Community Oriented Policing Service (COPS) and Not In Our Town.

The film goes beyond the headline-grabbing violence of one of the most deadly hate crime attacks in recent U.S. history. In the year following the shooting, Oak Creek community members come together to heal, and to address underlying issues of intolerance in their town. Police Lt. Brian Murphy, shot 15 times in the attack, joins the mayor and police chief as they forge new bonds with the Sikh community. Young temple members, still grieving from the tragedy, emerge as leaders, and thousands gather for vigils and a 6K run to honor the victims. Together, a community rocked by hate is awakened and transformed by the Sikh spirit of relentless optimism.

Oak Creek Excerpt from Not In Our Town on Vimeo.