In this week’s episode of True Blood Sarah, a deeply misguided character hallucinates that two of her past, now dead, mentors/lovers are vying for her soul. It mocks two and a half religions pretty well. Here is how the conversation went:

“I am here because you’re gonna die tonight, Sarah. I am here to give you a choice between heaven and hell. Because there is still time to save your soul.” said Steve Newlin, the head of an anti-vampire church, which is depicted a caricature version of evangelicals.
“There is no heaven. you don’t need it. There is only now. And nothingness.” said Shishir Kurup Sarah’s yoga guru, who slept with his students.
“Nothingness? What is nothingness? I don’t know what nothingness is. ” cried Sarah.
“Which is why Christianity is a way better deal. If you choose Jesus your meeting with the heavenly father, which takes place in the risen Christ through the communion of the holy spirit awaits.” proclaimed Steve.
“Follow the path, Numi [Sarah’s Buddhist name]. Die a Buddhist.” said Shishir.
“Fuck the path, Sarah. Die a Christian.” comes the retort from Steve.
“Buddhist!”
“Christian!”
“I choose neither. I choose me! I am the cure. I am the Messiah. I choose myself.” Sarah makes up her mind.
“That’s a bad, fucking call right there, Sarah. You never could stand on your own two feet.” laughs Jason, an other ex-lover, who just showed up in the hallucination.

This little interlude is one of the better depictions of what can happen at the marketplace of religion. If, unlike in traditional society, individuals can choose their own religions, then those religions will develop marketing techniques to get the attention of the wavering faithful. Christianity positions itself as a “deal” and offers eternal happiness (for a price). This version of Buddhism on the other hand offers earthly focus and no illusions for the afterlife.

Sarah believes she made an independent choice, by choosing “herself.” It is understandable and quite universal that she doesn’t want to die and chooses life. However when she pronounces herself as the Messiah, her choice of using a Judeo-Christian term shows the influences of her upbringing. So sh does choose a version of Christianity, just not the one offered to her by the reverend. It also shows the “rugged individualism” value deeply seated in the American psyche. I was glad to hear the cynical response to that, confirming that it wouldn’t work, because she has a dependent personality.

See slivers of Steve and Shishir: 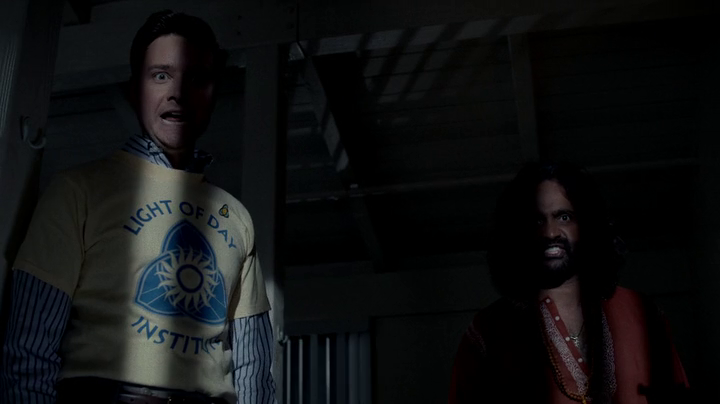