Hollywood Under Siege: Martin Scorsese, the Religious Right, and the Culture Wars 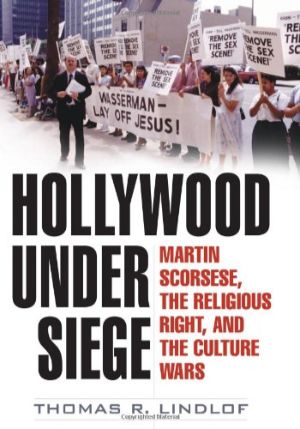 In 1988, director Martin Scorsese fulfilled his lifelong dream of making a film about Jesus Christ. Rather than celebrating the film as a statement of faith, churches and religious leaders immediately went on the attack, alleging blasphemy. At the height of the controversy, thousands of phone calls a day flooded the Universal switchboard, and before the year was out, more than three million mailings protesting the film fanned out across the country. For the first time in history, a studio took responsibility for protecting theaters and scrambled to recruit a "field crisis team" to guide The Last Temptation of Christ through its contentious American openings. Overseas, the film faced widespread censorship actions, with thirteen countries eventually banning the film. The response in Europe turned violent when opposition groups sacked theaters in France and Greece and caused injuries to dozens of moviegoers. Twenty years later, author Thomas R. Lindlof offers a comprehensive account of how this provocative film came to be made and how Universal Pictures and its parent company MCA became targets of the most intense, unremitting attacks ever mounted against a media company. The film faced early and determined opposition from elements of the religious Right when it was being developed at Paramount during the last year the studio was run by the celebrated troika of Barry Diller, Michael Eisner, and Jeffrey Katzenberg. By the mid-1980s, Scorsese's film was widely regarded as unmakeable―a political stick of dynamite that no one dared touch. Through the joint efforts of two of the era's most influential executives, CAA president Michael Ovitz and Universal Pictures chairman Thomas P. Pollock, this improbable project found its way into production. The making of The Last Temptation of Christ caught evangelical Christians at a moment when they were suffering a crisis of confidence in their leadership. The religious right seized on the film as a way to rehabilitate its image and to mobilize ordinary citizens to attack liberalism in art and culture. The ensuing controversy over the film's alleged blasphemy escalated into a full-scale war fought out very openly in the media. Universal/MCA faced unprecedented calls for boycotts of its business interests, anti-Semitic rhetoric and death threats were directed at MCA chairman Lew Wasserman and other MCA executives, and the industry faced the specter of violence at theaters. Hollywood Under Siege draws upon interviews with many of